While in the artsy neighborhood of Palermo-Soho, I quickly developed a strong admiration for not only the vibrant people that lived there, but for the architecture. With influences mashing up Parisian romance and Italian renaissance, it was hard to believe I was in the deep south! My affinity honed in on the doors and entrances of coffee shops, eyeglass stores, boutique restaurants, and clothing stores. The doors leading to local homes that felt like the entrance to an old palace or seemed to belong to a sports car garage instead. Some had vines covering wrought-iron gates, others had ornate stone-work surrounding it, many have gas lamps adding to the vintage feel of the city. It all felt so grand and mystical because of these doors did not give away what was behind them and no two were alike. 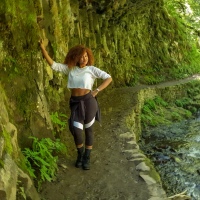